skip to main | skip to sidebar

Yesterday I talked about the fear of premature burial, which is an offshoot of claustrophobia or the fear of small, enclosed spaces. Today we move on to the polar opposite of that -- the fear of large abandoned structures. 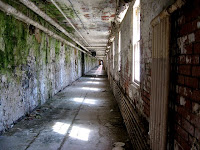 Tales of haunted buildings are as old as civilization, but there is something especially modern about this particular fear, something connected to the unease evoked by industrial decay. Nowadays, traditional ghosts can't hold a candle to the more visceral terrors of the Nameless Things that lurk in toxic ruins. There's an icky quotient, certainly, and a basic fear of the unknown, but I believe abandoned buildings derive the bulk of their power to frighten from a kind of collective subconscious guilt -- an unspoken feeling that we, as a race, perhaps deserve to be punished for what we have wrought, the desecration and the devastation, the hubris to build and then desert, to enclose and then vacate. A walled-in space is built to be inhabited, to be used or worked in. If we leave it empty, the Universe will populate it with something and god help us when come back and disturb it. Popular game franchises like Doom and Silent Hill freely tap into this poisoned well, to the point where they barely need any back story at all -- you find yourself in an ill-lit basement, there are monsters trying to eat you, now fight your way out. 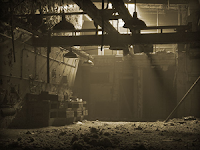 In recent years, a new kind of hobby has been gaining in popularity called Urban Exploration or UrbEx. The title is a bit of a misnomer, as "urban explorers" don't limit their activities to cityscapes, but it is often in cities where they find their most atmospheric locations. The really nice thing about this subculture is that it strictly adheres to a self-created code of ethics most easily summarized in the motto: take only photos, leave only footprints. Though, strictly speaking, they are trespassers, Urban Explorers are not vandals or thieves, and will in fact police their own. And the photos they bring back from their adventures are truly amazing. Instead of arousing aversion or apprehension, they reveal an undeniable attractiveness, or as the title of one notable coffee table books dubs it, the Beauty in Decay

, born not only of a hearkening back to past grandeur, but also the lush colors and textures and odd juxtapositions that ruin can engender. 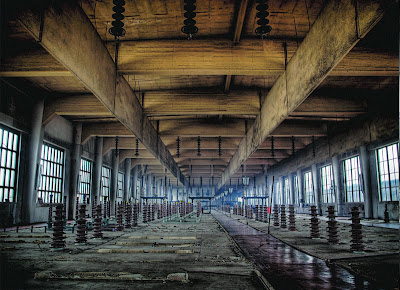 Fortunately, you don't have to risk life, limb, and lung to find this beauty, as there as many talented brave souls willing to do the leg work for you. Two of my favorite places to hang out during the lonely, late hours are The Kingston Lounge and Opacity. Getting lost among their photography is the next best thing to packing a flashlight and a crowbar and UrbExing it yourself.

For further exploration into this subject, I recommend the documentaries: Echoes of Forgotten Places

, Urban Explorers: Into the Darkness, and the most excellent Dark Days, available for streaming on Netflix (and which, while not strictly about Urban Exploring, investigates the history of homeless living underground in abandoned tunnels). I also recently watched a newish and quite effective Australian horror film called The Tunnel, that is taking the unique distribution model of a legal torrent. Follow that link for more info, but use Google for an actual torrent link.